Seein' As It's So Near to Christmas

I was thinking tonight that Walt Kelly is my favorite cartoonist in the history of great cartoonists. And I was going to say that Pogo is ALmost my favorite comic strip. Then I tried to think of a strip that was more of a favorite than Pogo . . . and I couldn't think of one! Kelly and Pogo are my candidates for BEST cartoonist and strip of all time! And that includes Hal Foster, Milton Caniff, and Alex Raymond!

Here's an early Christmas present for you'n'me — a be-you-tiful Christmas Sunday from the early years of Pogo. Thanks again, so much, to DJ David B for the raw scan! 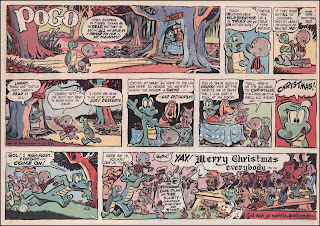 Posted by Thomas Haller Buchanan at 1:35 AM