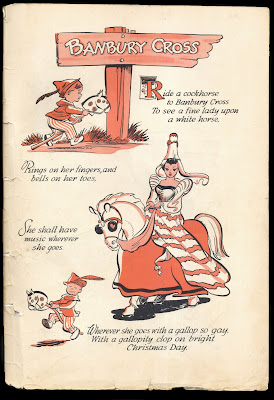 Kelly adapted many a rhyme from folk lore and nursery rhymes for use in the Mother Goose holiday comic books, many from the Mother Goose cannon itself. Below is an interpretation of the ditty, pulled from Wiki. I would add that Kelly's final line about Christmas day may have been his own, to tie it in to the theme of Christmas with Mother Goose. Or it could just be from a different version.

Further below, for comparison, are graphics by WW Denslow, he of Oz book fame, from 1901.

The instability of the early recorded lyrics has not prevented considerable speculation about the meaning of the rhyme.

A medieval date had been argued for the rhyme on the grounds that the bells worn on the lady's toes refer to the fashion of wearing bells on the end of shoes in the fifteenth century, but given their absence from so many early versions, this identification is speculative. Similarly, the main Banbury Cross was taken down around 1600, but other crosses were present in the town and, as is often the case, the place may have retained the name, so it is difficult to argue for the antiquity of the rhyme from this fact.

A "Cock Horse" can mean a high-spirited horse, and the additional horse to assist pulling a cart or carriage up a hill. From the mid-sixteenth century it also meant a pretend Hobby horse or an adult's knee.

Despite not being present or significantly different in many early versions, the fine lady has been associated with Queen Elizabeth I, Lady Godiva, and Celia Fiennes, whose brother was William Fiennes, 3rd Viscount Saye and Sele (c. 1641-1698) of Broughton Castle, Banbury, on the grounds that the line should be 'To see a Fiennes lady'. There is no corroborative evidence to support any of these cases. 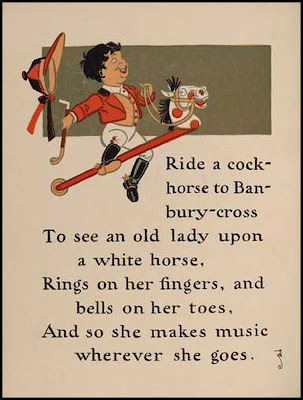 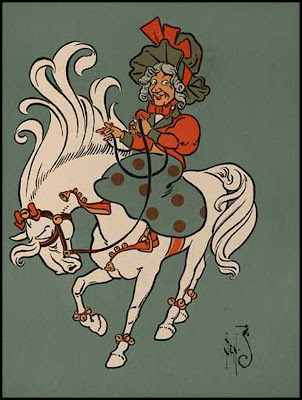 Posted by Thomas Haller Buchanan at 8:03 AM