Believe It or Not

I'm not going to be too literal in chronologies on this site, but I do feel that it's good, early on, to look at Kelly early on—just a bit.
Kelly was a cartoonist for his his high school paper. Most all cartoonists have to start out being influenced in style by other cartoonists, and in Kelly's case John Held Jr. was a primary inspiration. Although there are traces of the other popular cartoon styles of the time. Just looking at the samples below I see some similarities to early gag cartoons of Will Eisner, Bob Kane, Milton Caniff and others, all learning their craft from the same comic pages of newspapers and magazines of the time.
Directly below, Kelly pays direct homage to John Held Jr. 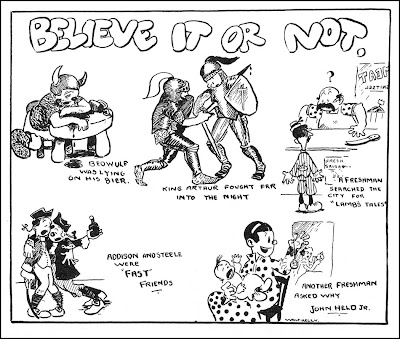 Above, Walt Kelly
Below are some samples of Held's work, exTREMEly popular with Kelly's generation: 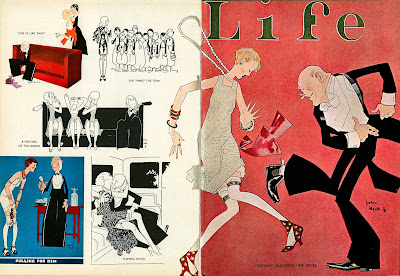 Above, John Held, Jr.
The John Held Jr samples above and below are borrowed from ASIFA-Hollywood Animation Archive, which if you haven't been there before, you simply must go and explore sometime. There's some great Kelly stuff there as well.
In the words of Kori Alexander:

The artist John Held, Jr. is probably most responsible for  what has become the stereotypical visual representation of  the young men and women of this time period. From around  1915 until the later end of the 1920s, Held was responsible  for adorning some of the most influential magazines of the  time with his distinctive cartoon art. His caricatures of  the flapper girl and her loping, goofy college suitors were  not only indicative of the freewheeling nature of  America's youth, they were an indictment of all of the  foolishness that went along with it!

Yet, it was Held's ability to identify the irony within the  lives of these youth that ultimately qualified his work as  a mature and absolutely relevant cartoonist. In even his  most dogmatic of cartoons, Held's humor prevails over his  opinions, compelling the observer to laugh along with him.  Herein lies Held's true magic. Not unlike F. Scott  Fitzgerald (the literary clairvoyant of the times), his  brilliance stems from a keen power of observance rather  than a preordained or painstakingly learned formula for success. 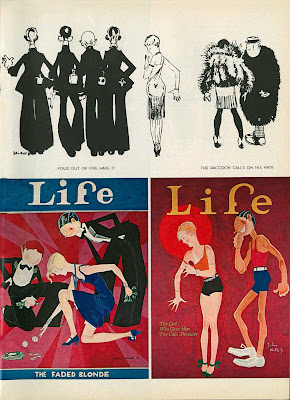 Above, John Held, Jr.
Kelly learned more than just cartooning style in his formative years, he was learning the 'keen power of observance rather  than a preordained or painstakingly learned formula for success.' 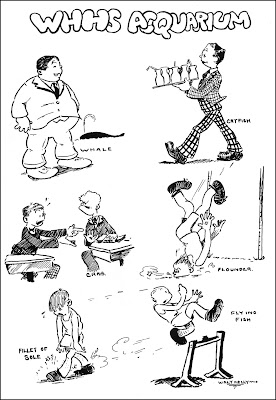 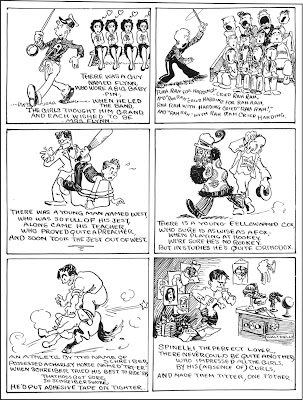 Posted by Thomas Haller Buchanan at 8:12 AM