The first autumn after my high school graduation was a heady time of freedom and trouble-making, footloose and all that stuff. But one of the headiest rushes that I had that fall, was opening a tube that was mailed to me, having been forwarded from one address to another.
It was from Walt Kelly and contained a large crayon on newsprint drawing of Pogo himself. The accompanying note from Kelly congratulated me for having come in first place in a national high school editorial cartoon contest that I was not even aware that I had entered. The next day I received official notice from the committee, and then after that I found out that my fellow journalism staff had entered my work to the competition the previous spring, without telling me.
It was very exciting that I learned of it first from Kelly, who, of course, was a supremo editorial cartoonist himself. He even recalled having met me 4 years previously. This was the portrait of Pogo that he sent: It was a preliminary character sketch for the Crest reprint book Pogo for President and, to me, is the ultimate Pogo personality.
But he certainly didn't always look like that. Cartoon characters age and evolve over time in a parallel course with their creator's talents and skills. Below is Kelly's 1959 rendering from Ten Ever-Lovin' Blue-Eyed Years with Pogo, showing how he seemed to remember Pogo's first appearance from 1943. But it wasn't quite accurate. 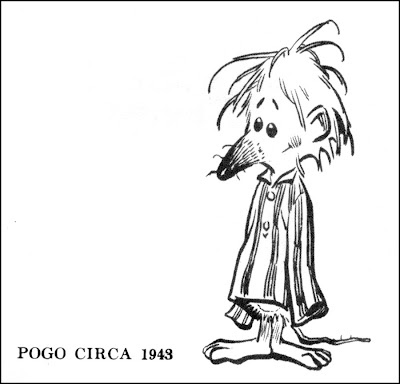 Kelly tried even earlier, in 1952, I think, to compare the original with a scant 9 years of evolution. Still not quite accurate, because even though unkempt, the rendering on the left below was a bit too cute. 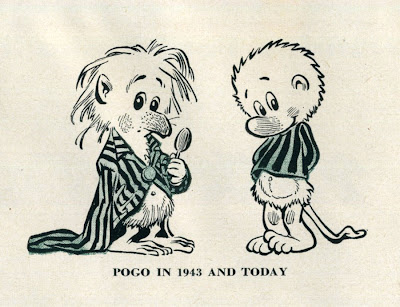 Now these two images below show the TRUE first appearance of Pogo the rat, I mean Pogo the possum. The first, being his very first appearance anywhere, and the bottom image, scaring the heck out of me, looking like the possum from hell, from just a few months later. Both of these images were scanned from the Eclipse reprint series.
We can all be grateful that Kelly's talents and skills evolved. 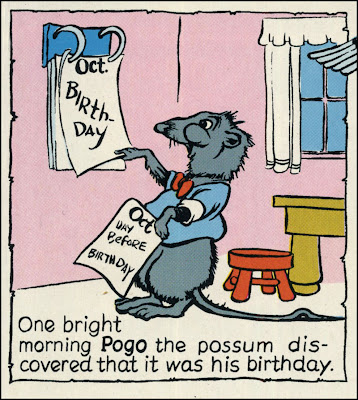 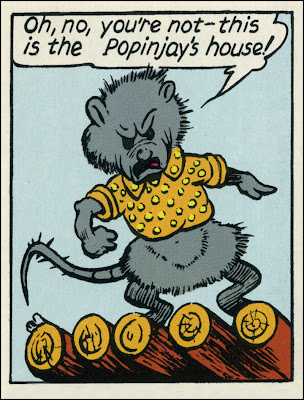