One more Doyle and Sternecky before returning to Kelly.  I admire that these two guys made great effort to keep the spirit of Kelly alive. That's just what we're attempting to do with this blog. 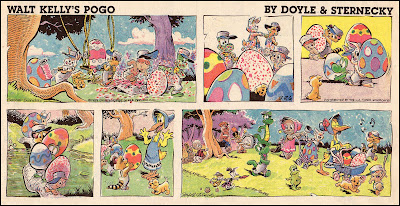 Posted by Thomas Haller Buchanan at 12:23 AM 5 comments:

Hi folks! I've been trying for several days to post on this blog, but I was locked out for some technical snafu. But I'm back on, thanks to my daughter's dexterity!

Another example here of Doyle and Sternecky's run of Pogo, this from the time that comic book artist and writer Frank Miller had hyped up the Batman mythos with The Dark Knight dark and gritty tales.

At first, one might think, oh geez this is so un-Kelly, but Kelly HAD done similar parodies in the Simon & Schuster books, and this strip is funny, and who's to say if Kelly wouldn't have done something like this if he had survived into the '80s...maybe even the dedication to Batman's daddy Bob Kane on the side of the boat. 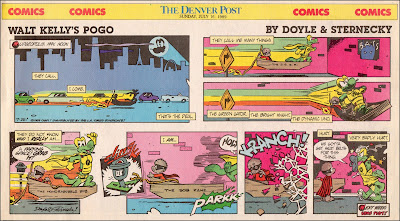 Let's stick with post-Kelly for a few strips, as we show the work of Doyle and Sternecky continuing the strip into the '90s. To tell you the truth, I liked their run, of the few strips of theirs that I saw and clipped.

Since it really couldn't be Kelly doing the work, I thought these guys were the next best thing, as they went above and beyond the cornpone simulations by Selby and others, inventing new and novel shtick as Kelly was wont to do in his day. The drawing was decent and colorful.  I've read that some fans hated the work by D&S, but I thought they showed some true wit. 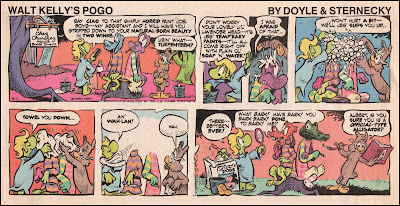 Posted by Thomas Haller Buchanan at 12:59 AM 4 comments:

Hi guys—I'm dealing with a can of worms, so to speak, for the next couple of days. Hopefully I can post something in a few days. 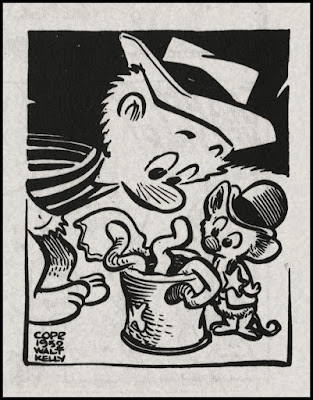 Posted by Thomas Haller Buchanan at 2:53 AM 2 comments: