Herewith is Pogo, POST Kelly, as you can immediately tell. Oog!
It just goes to show how special the art was by Kelly himself. 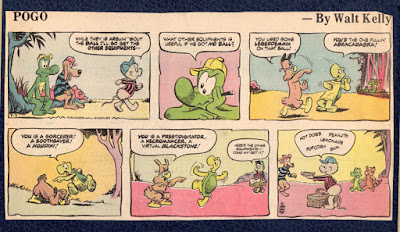 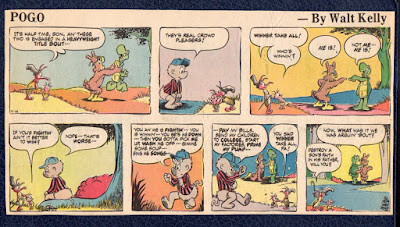 Posted by Thomas Haller Buchanan at 12:25 AM 6 comments:

Fits of Foolish Glee, Hooray for Spring in '73

Here again is a two fer one posting of 1973 strips recycled from a decade earlier in 1963, as confirmed by our Friend-in-Kelly, Hun.

Only two tiers, but better than nothing, sez I. 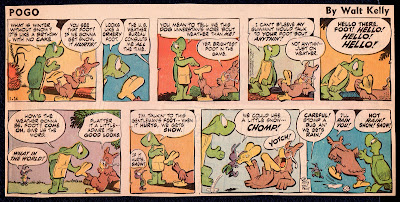 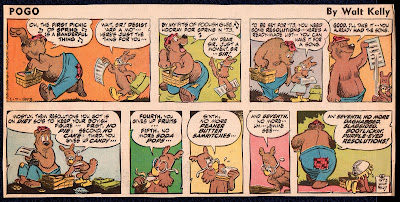 Posted by Thomas Haller Buchanan at 2:08 AM 4 comments:

Giving you double for your money this week. These strips are late in the game in Kelly's life. They are likely reruns or repurposed—I haven't had time to check. Kelly was in a world of hurt at this point with only months to live, so people were pitching in to keep the hoopla hooping.

At the same time, newspapers were downsizing their comic sections and a double tier Pogo strip just wasn't what the doctor ordered. 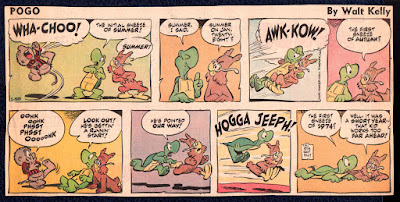 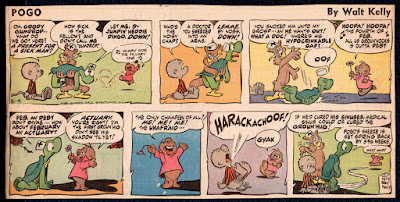 Posted by Thomas Haller Buchanan at 1:25 AM 5 comments:

A Tree Nobly and Gorgeously Trimmed

That second panel has probably perty close the smallest size Kelly's ever drawn any of his characters. 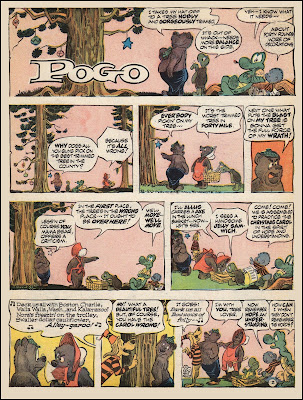 Posted by Thomas Haller Buchanan at 3:19 AM 3 comments:

I regret that the color (and lack of color) is screwy on this page. It shows the little regard that pressmen had for the comics by 1970. They probably said, "Eh, no one notice or care if we don't finish this. This'll just be trash in a couple of days", not knowing that 46 years later people all around the world DO notice and DO care. 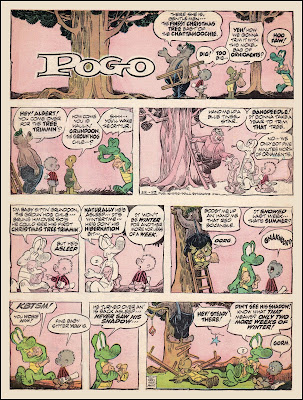 Posted by Thomas Haller Buchanan at 2:25 AM 6 comments: