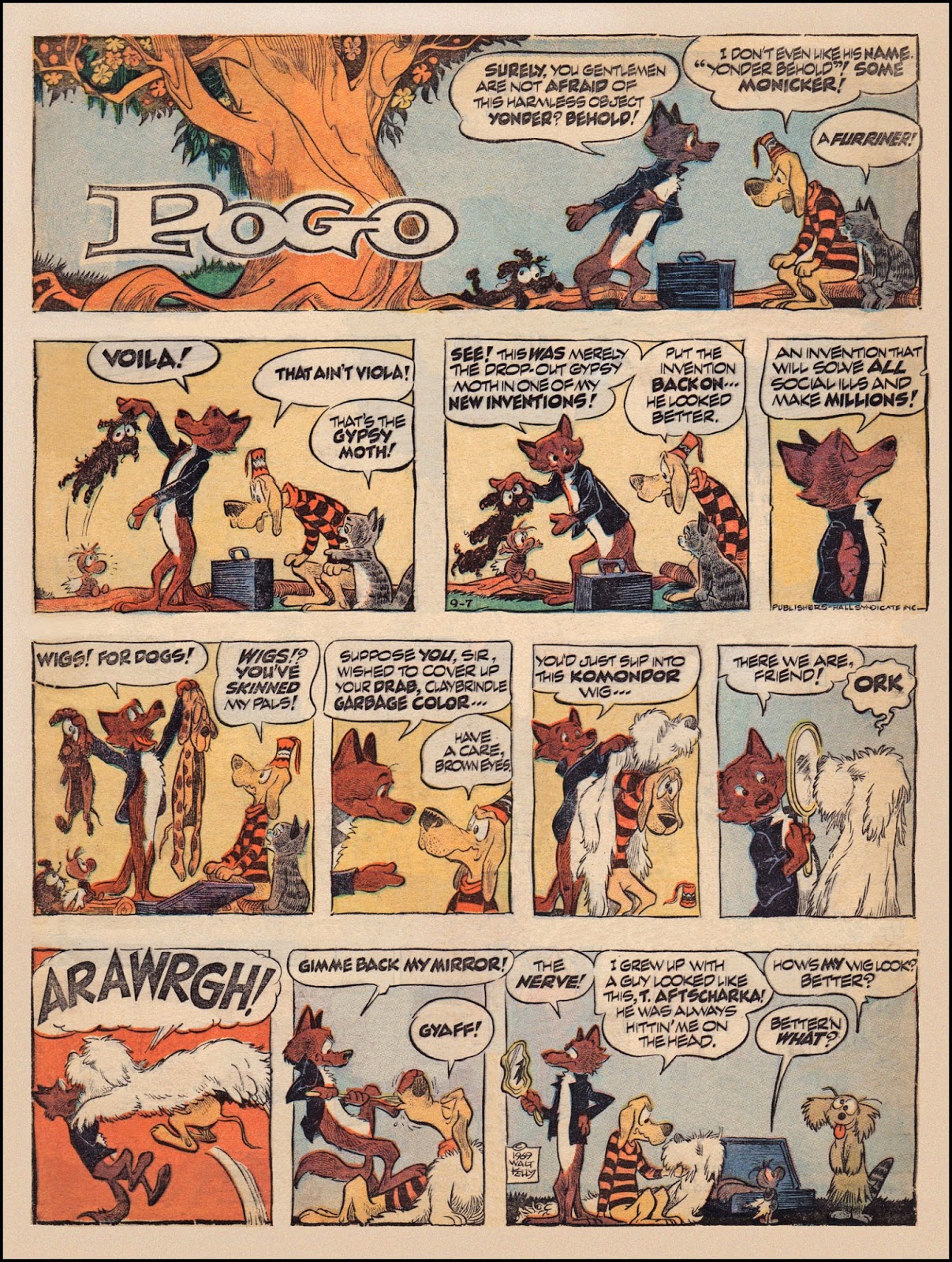 This strip took extra long to clean up due to bleed-through from the other side, but the show must go on. And this show is a little creepy, 'cause of those wigs for dogs. Notice that Sam doesn't deny Beauregard's accusation of skinning his pals.

No other comic strip came close to such dialogue as Kelly gave us.

Below is a pic of a Komondor, descended from an Aftscharka. One wonders if Kelly had a personal history with such a dog. 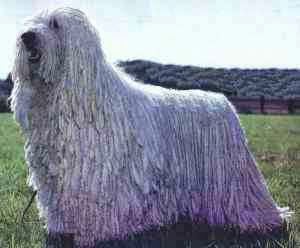 Posted by Thomas Haller Buchanan at 2:10 AM 3 comments:

No time to say much this week...just this: 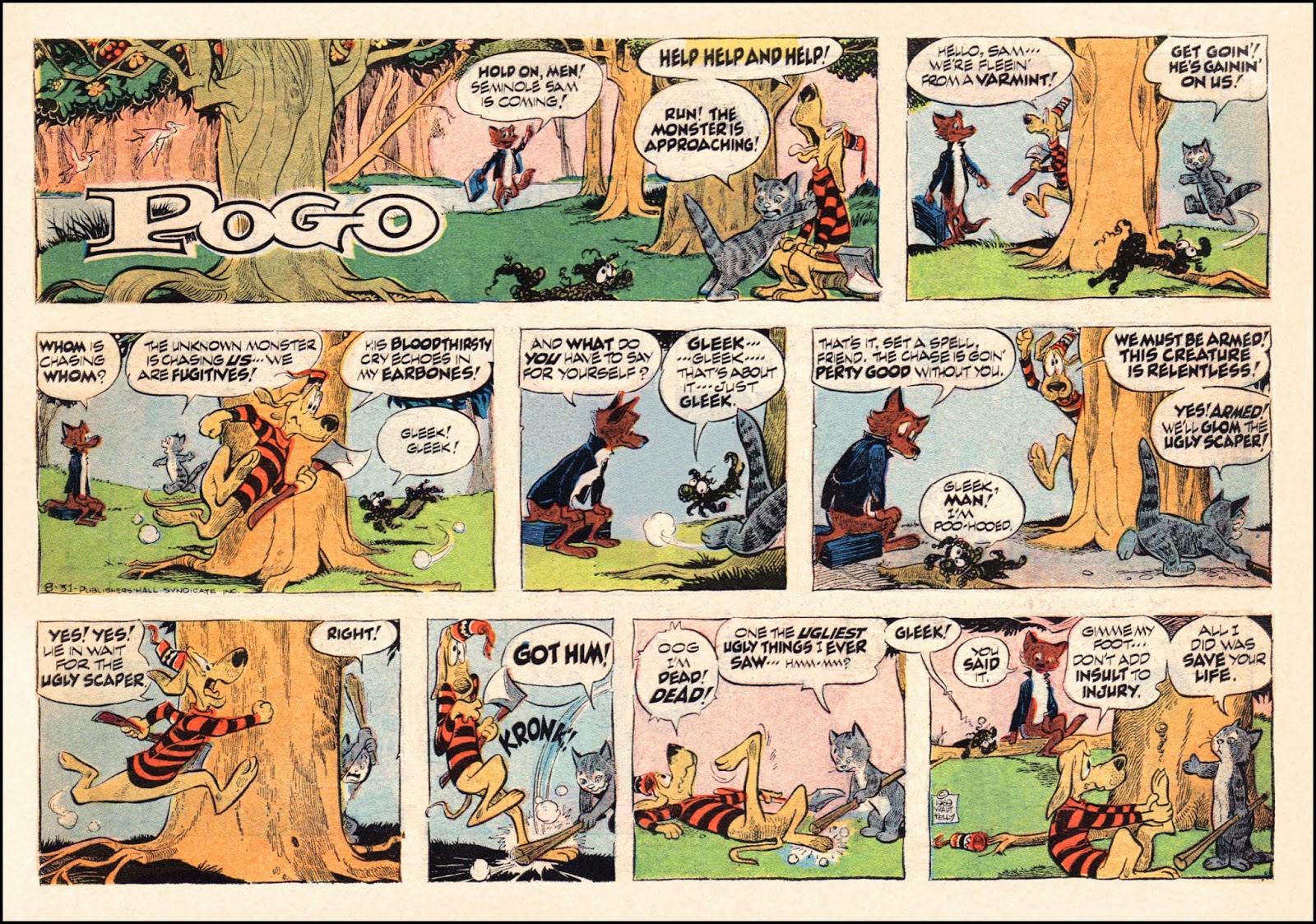 Posted by Thomas Haller Buchanan at 1:18 AM 5 comments:

This is coming to you a bit late, today, on Sunday. You can pretend your newspaper was a late delivery like ours was today, here in real life. I was a paper boy in my youth and there were days when problems were incessant.

This Sunday strip had the usual messy stuff to clean up, but I do like to leave traces of high-speed press problems here and there to back up the newspaper experience. Kelly was fully aware of how his hard work too often took its chances in daily reproduction. I'm amazed that his Sundays were not printed in full-color book form during his lifetime. At that time, the only MAJOR full-color book with the full Pogo cast was the hardback song book, which was lovely, but even there the coloring was screwy.

Bless Fantagraphics for their efforts, even if their production is like waiting for Chug-chug, the Mail Duck, to deliver it. 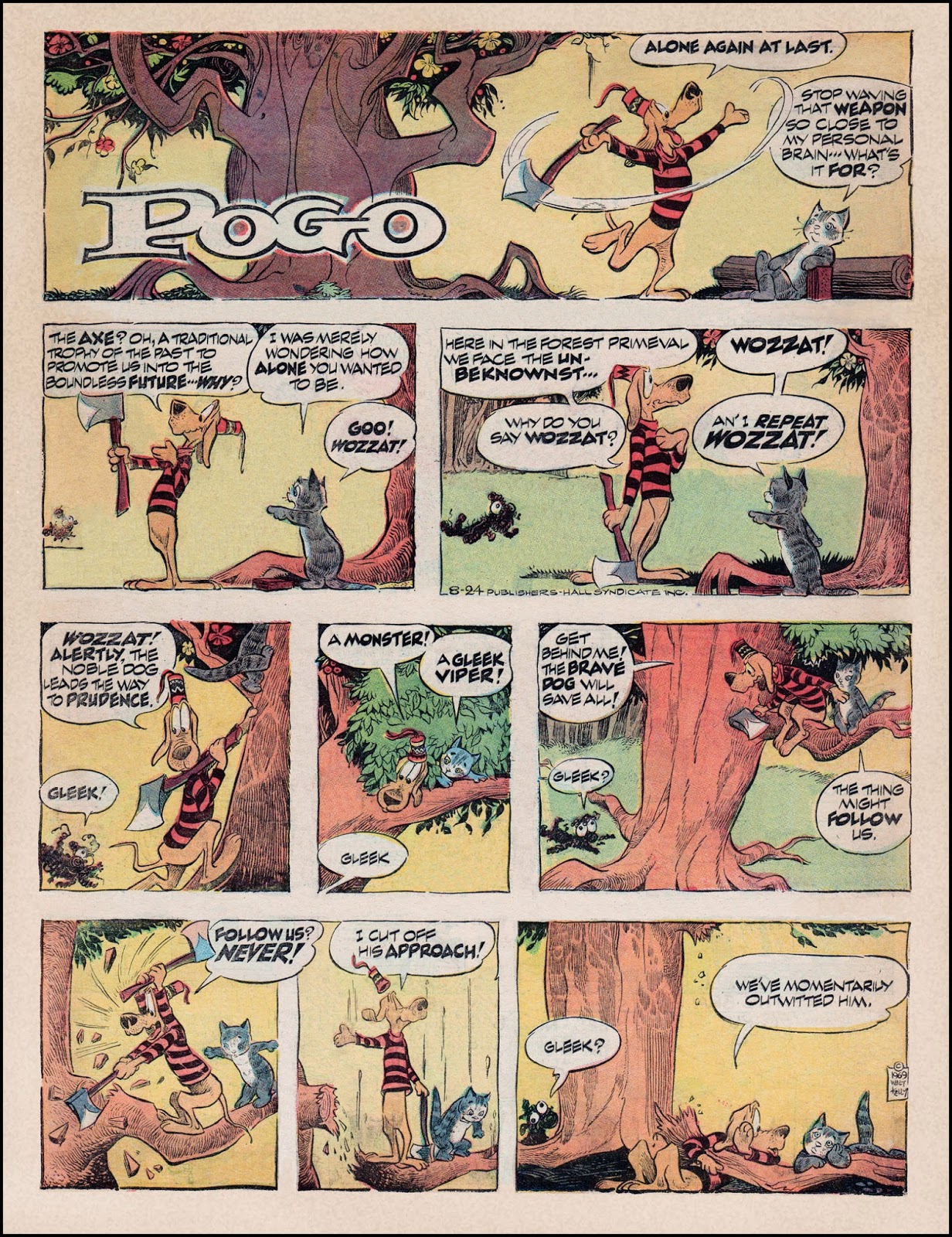 Halt! In the Name of the Lore!

Well, this was a pleasant surprise.

I opened an email this evening to find a fully edited, cleaned up version of last week's messy eyesore of an unedited strip. Our Friend-in-Kelly, Frits van der Waa, took it upon himself to do us the favor, though he admits that it took him more than a day to accomplish it (I'm down to about an hour and a half, but I've had several years of doing this to get the hang of it). Frits says that working on this makes him appreciate my work even more than he already did. Swell compliment.

I think Frits did a beautiful job, better than me, but it's just too time-consuming for him to do more. Thank you mucho much Frits, for cleaning this one up for everyone's scrapbook! 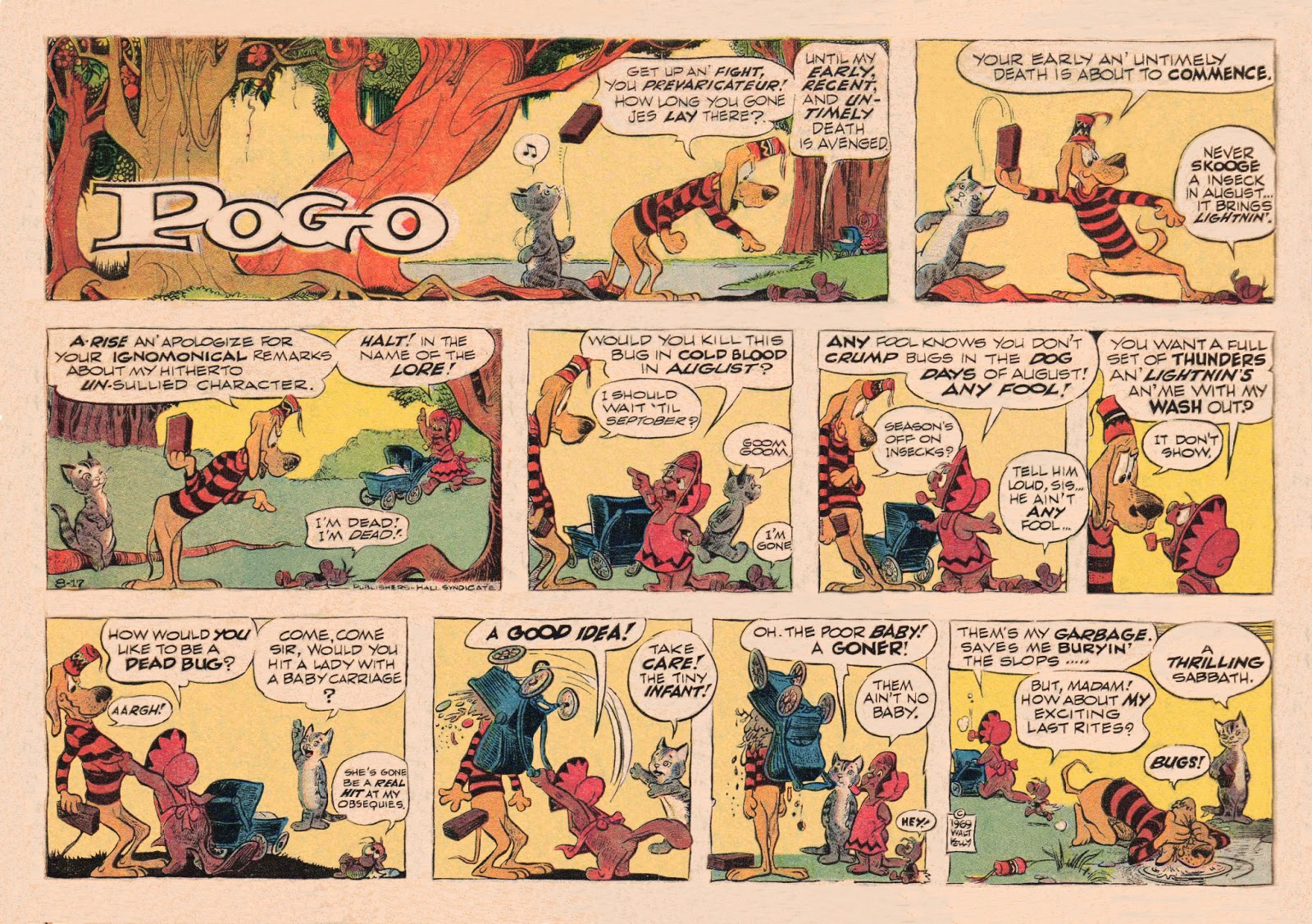 Well, if I can't get more than a couple of encouraging hurrahs from Friends-in-Kelly for Kelly publishing ideas, I can only imagine the grand thud that would be heard from the general public.  I'm moving on, with other fish to fry.

I have no time to edit this Sunday's strip for bleed-through and mis-registration. It's as good a sample as any to show a typical pre-editing image. 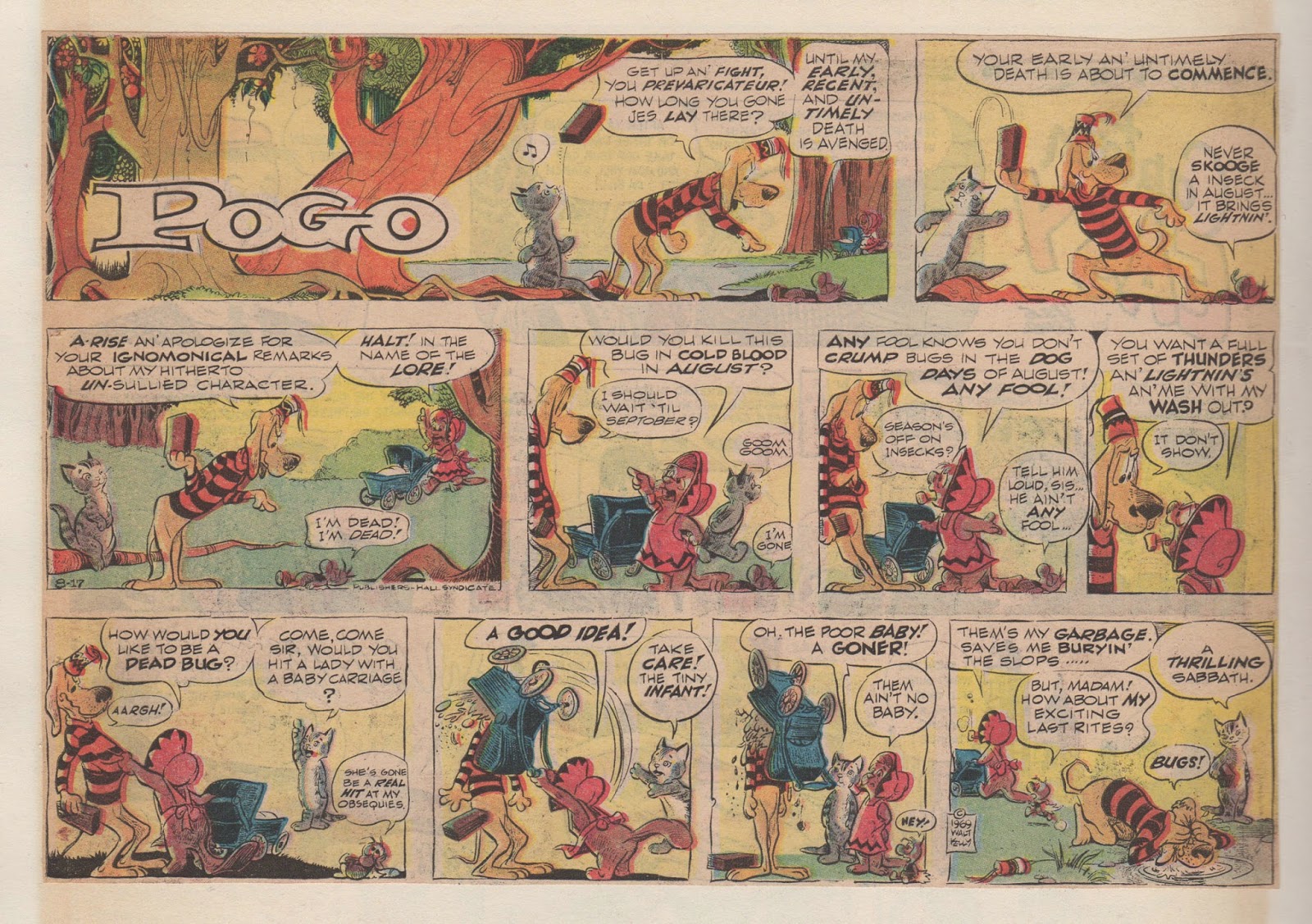 Posted by Thomas Haller Buchanan at 12:55 AM 7 comments:

Modifying my view of what could be, I'm enamored of the concept of a graphic novel approach to illustrate story slices of Kelly's life, using artistic license to embellish it a bit in fun ways.

With artistic license firmly in wallet, how about a story entitled 'Kelly and Mouse', showing Kelly's time at Disney Studio, with 'Mouse', good ol' Mouse, nestled in Kelly's lapel, trading barbs and witticisms with Kelly's cronies, giving advice to Kelly at the drawing board, slipping off to make a little mischief for Walt Disney and Mickey. You heard that idea here first. That's MY story, illustrated by a great modern cartoonist!

You hard-core Kelly fans who only want Kelly art wouldn't be interested in a concept of Kelly as a character? 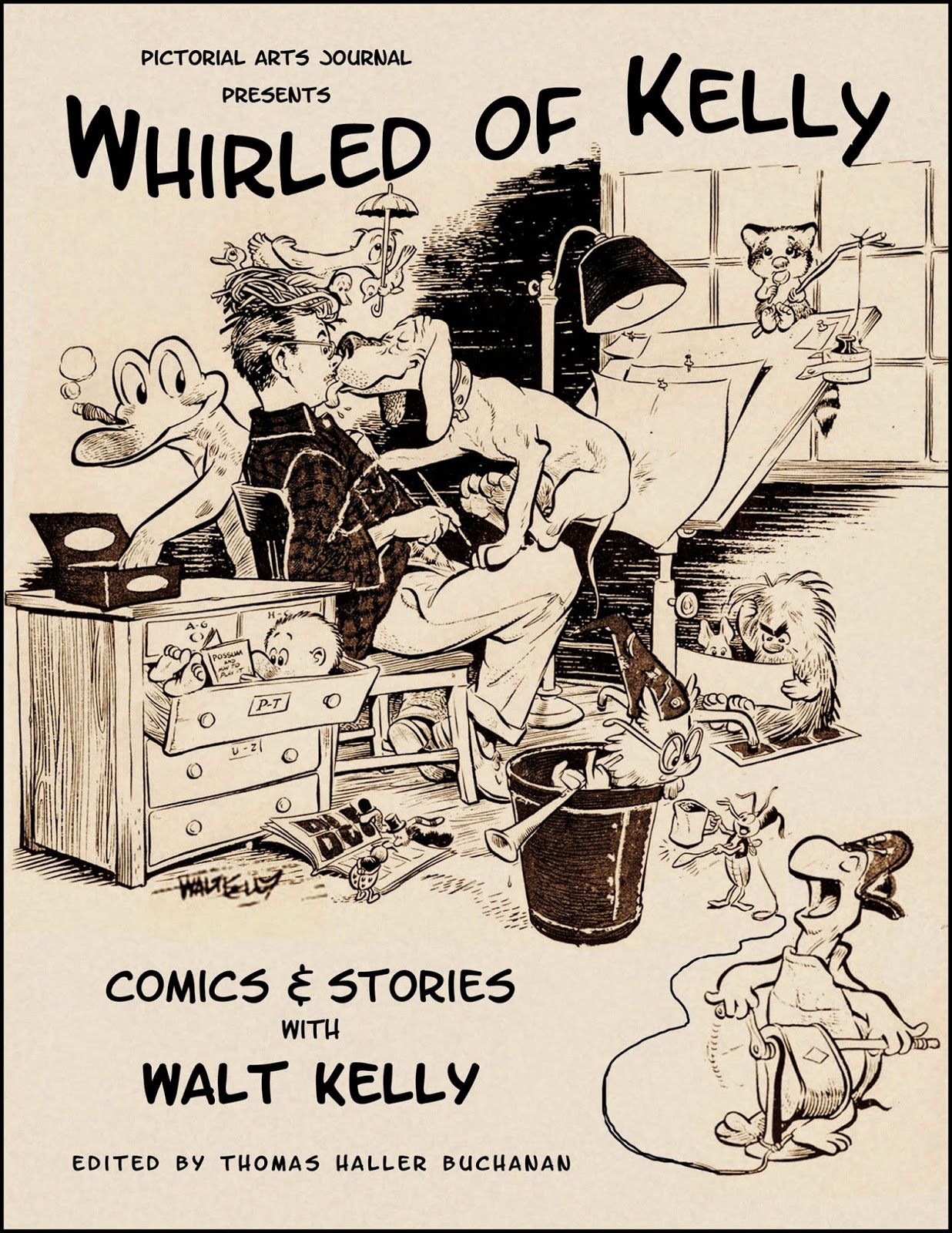 Mock-up title page of a projected book,
illustrated by the finest cartoonists of today.

Posted by Thomas Haller Buchanan at 12:19 AM 2 comments: 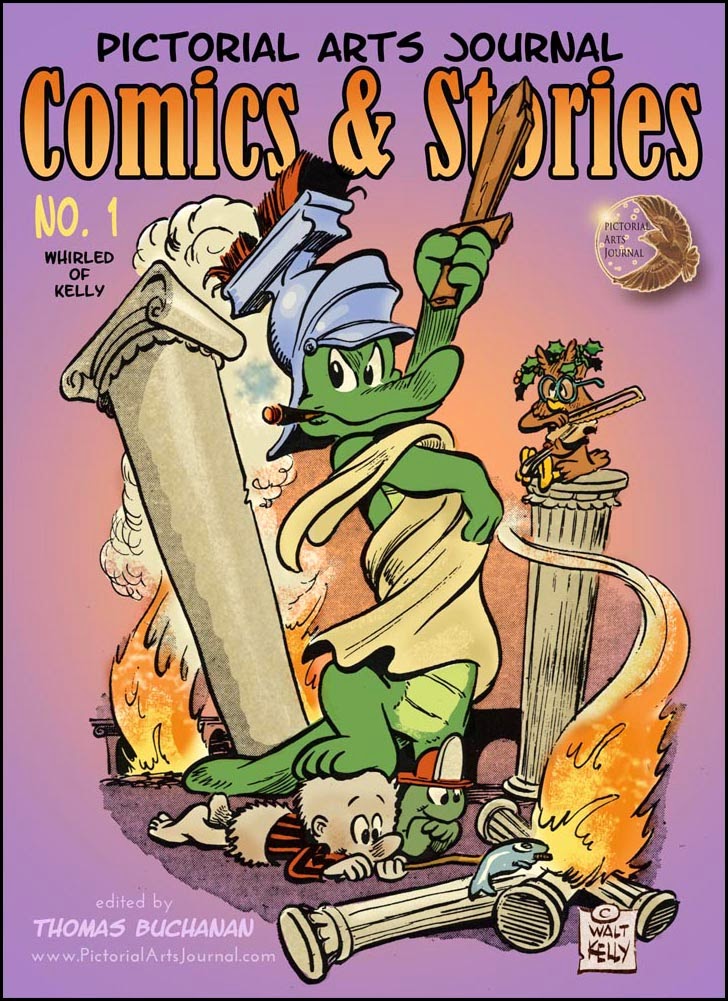 This is my burning question ('burning', get it?): Would you pay for a comic book that looked somewhat like the cover above, knowing that it had 'fan fiction' by professional cartoonists that have been influenced by Walt Kelly in one way or another over the years, each exploring some aspect of the Whirled of Kelly?

It might be a new Peter Wheat story, or a new Fairy Tale Parade story, or new whimsical poetry, or (hold your breath) a new Albert and Pogo story, or a really good emulation of Kelly's style venturing into realms unknown. The ideas could be wildly inventive, just somehow touching on the Whirled of Kelly.

As I say, these would be professional cartoonists, commissioned from around the world, with great understanding of the wit and charm of Kelly's art and writing. It wouldn't BE Kelly—of course there was only one Kelly. But think of the different creative teams that have spun their talents on the Disney characters and such. Only in this case maybe there's a story about a kid who collects Pogo stuff, to the befuddlement of her friends. Or Mouse, good ol' mouse, could explore back stage and under the floorboards of the Cirque du Soleil. Or Peter Wheat strays into the Okefenokee.

Securing creative rights and paying good rates for cartoonists would have to be dealt with, but I want to start here, by asking you Friends-in-Kelly for your thoughts. Please, one and all, I need your feedback, both positive and negative about this idea.

This would be a 'one-shot', something like the old Four-Color Comics series. Number 2 might be Carl Barks, or Bill Watterson, or Alex Schomberg, or Charles Schulz, or V.T. Hamlin, or George Herriman, or etc etc etc.

I dunno. TALK to me.

AND, if you would like a high-res (3.5 MB) 8.5x11" jpeg of the cover above without that pesky title type, just email me at Thomas@PictorialArtsJournal.com with "Kelly" in the subject field, and I will burn it over to you.

Kelly has turned this whole Krazy Kat homage inside out and wandered down the street with it. The general public would have no idea what Kelly was sourcing, and so what? With Kelly, we enjoy the journey, not the point of departure nor the destination. The G. Moth steals the show, even as the show goes on. 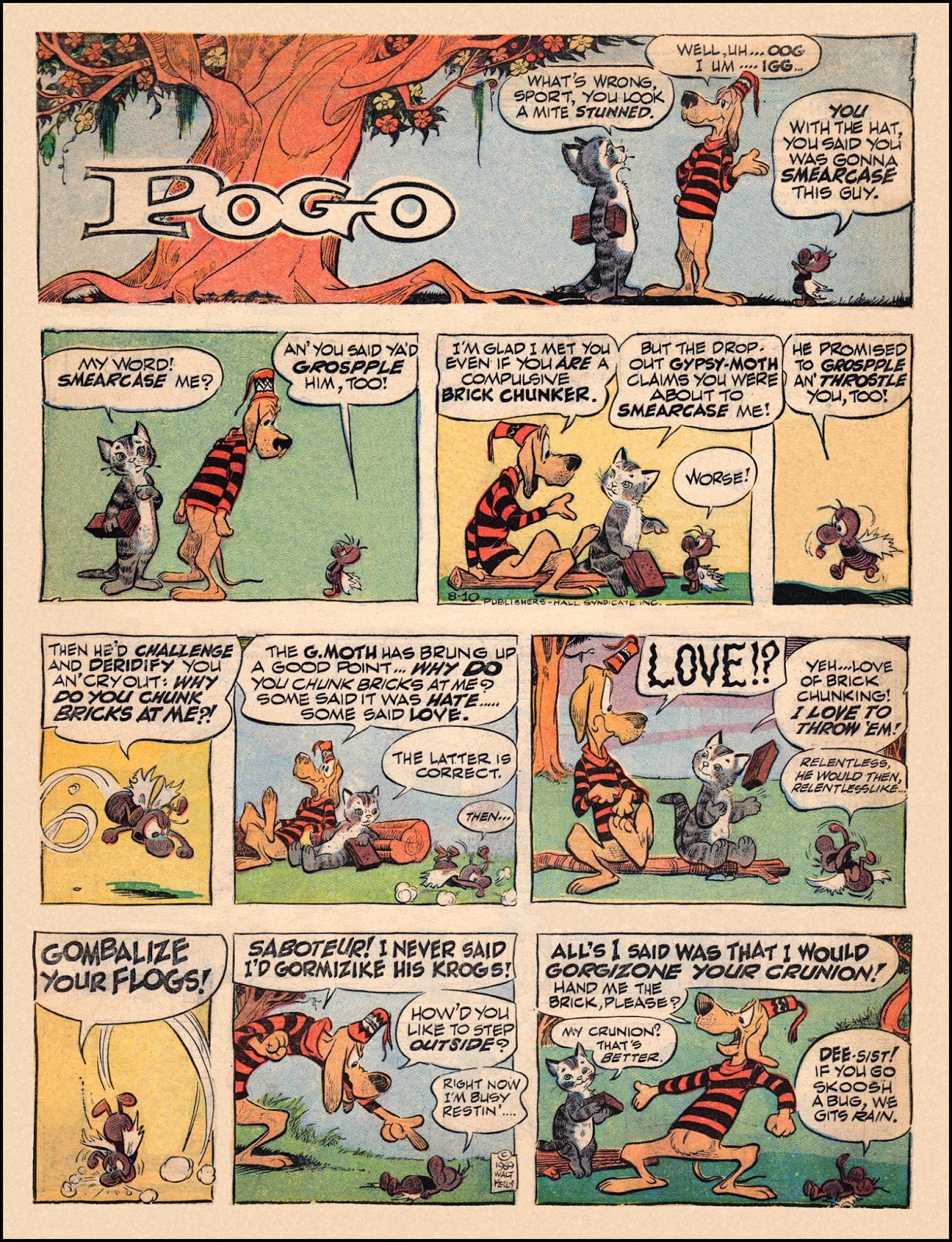 Thank you again, to those who have taken time to share your words of encouragement for continuation of this blog. Later this week, I'll have an important question for you and other members and readers of the Whirled of Kelly. Please check back in a few days...
Posted by Thomas Haller Buchanan at 1:12 AM 9 comments: