A Public Dump is a Public Trust!

Well, hi there! I'm glad to be back in your company, here with an 'early' edition of Sunday, Kelly Sunday. It's been a helpless feeling, being without computer for so long. Who woulda thought in my youth that I'd be addicted to an electronic gadget such as this when I was an old fart (though in my mind I'm still a dapper 24 year old).

My computer has risen again, but it's full of glitches, still giving me the twitches. I've restored my basic files, but the other hundred thousand files are all out of order and hard to reorganize. Another problem is that the scanner doesn't want to coordinate with the new hard drive, refusing to do its job. For my other blogs, that's no problem as I have hundreds of images already scanned. But for the Whirled of Kelly, I usually scan the next strip just before posting. We're lucky here, cuz I had just scanned this post's strip just before the computer crashed. So I was able to stitch the two pieces together and clean it up just now, but wottle I do for next Sunday? I'll try to figure it out this week, but I'm playing catch-up with deadlines and may not have time. IF that's the case, I'll post some other kool Kelly stuff that I do have already scanned.

Little by little I'll get back in your good graces, Mac willing. 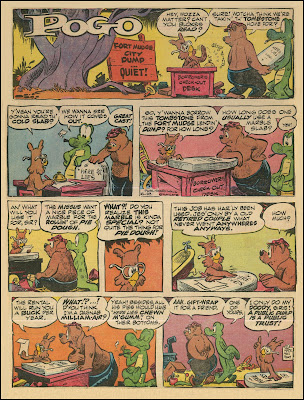