We're not jumping right into the Peter Wheat stories, for two reasons. One, I want to properly set up introductions and context of the series; and two, I want the traditional Sunday, Kelly Sunday strip to post first, and then we can let the hot first issue of The Adventures of Peter Wheat have the proper amount of cooling time, as good bread deserves. 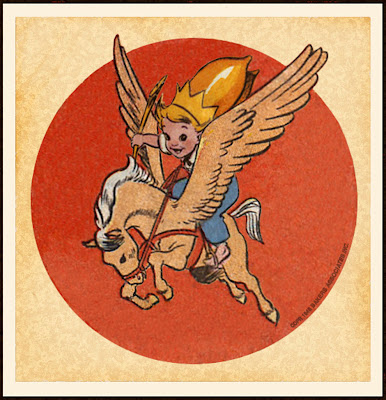 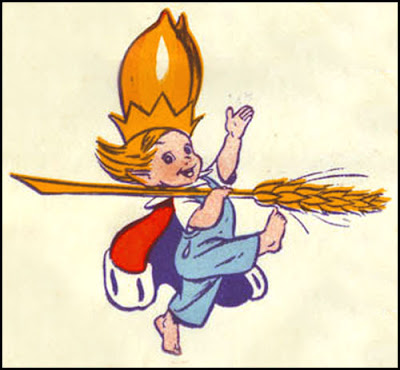 Adventures of Peter Wheat was a 16 page giveaway comic book, either the last half page or full page given over to an ad. Adventures of Peter Wheat ran 66 issues, with the first 35 featuring Kelly story and artwork. Later issues were written by Del Connell and drawn by Al Hubbard of Mary Jane and Sniffles fame. It's possible Del Connell did some writing on the last few Kelly issues; in Who's Who he's credited with writing the series starting in 1950 and the last Kelly issues came out in very early 1951. The book was monthly when Kelly worked on it; the Connell/Hubbard issues came out on a much more irregular schedule but are supplemented by several other publications. It continued until roughly 1957. 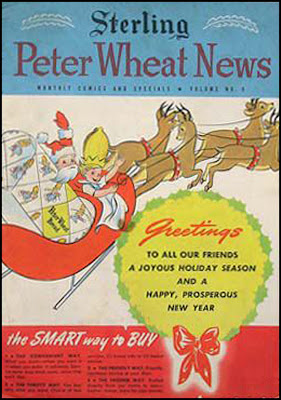 Peter Wheat News was a four page advertising flyer; the last two pages could be cut off and folded in half to form a four page mini-issue of Adventures. The Peter Wheat News stories were normally three issue arcs forming a 12 page story according to the Fort Mudge Most. The series was monthly and ran until at least issue 61. It may have run much longer; if it ended the same time Adventures did, it would have reached #111. All issues are extremely rare—Overstreet only lists 30 and the Fort Mudge Most guessed it ran to 36. Kelly is thought to have worked on the first 36. I have only seen 3 issues for sale in over a year of looking and a lot of searching online only turns up covers of about 5 other issues. It would not surprise me to learn that some issues no longer survive, at least in their complete form.
Known bakeries distributing Adventures inclue Krug, Sterling, Rice's, Donaldson, Friedrichs', Mrs. Conklings, and the Kitchen Fresh Bakery in Long Beach, California. Which means the book was distributed on both coasts, if not nationwide. Issues also exist with no bakery listed. The only bakeries I've seen issues of News from are Sterling and Krug, which are the most commonly seen names on Adventures, as well. It seems likely, based on our very small sample of scanned issues, that the second page of News was locally produced and specific to the bakery.
There were also a large number of other giveaways featuring the characters. Most of those do not seem to feature original Kelly art, but several do use his promotional art or reprints of other items. 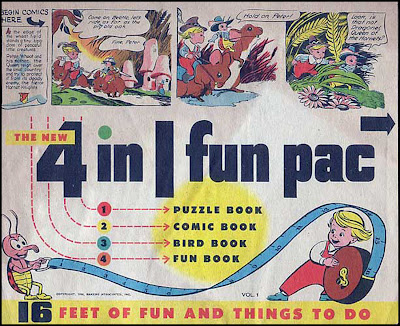 There were at least four 4-in-1 Fun Pacs; those include a healvily abridged reprint of earlier Kelly work. #1 has issue #1 of Adventures and #4 has issue #9; I haven't seen anything from 2, 3, or any later issues. They also include Hubbard artwork. I'm not sure if this is a reprint or not. 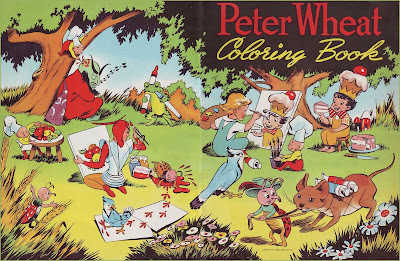 There was a coloring book that is mostly redrawn from Kelly panels. 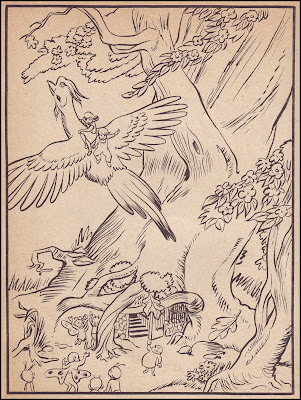 As well there was a Fun Book, a Puzzle Book, and an Artist's Workbook. 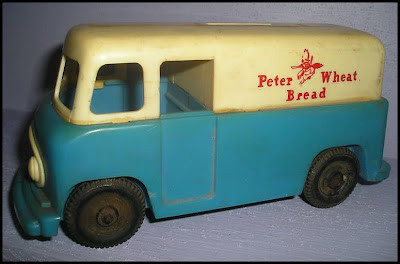 In the non-book category, there was a toy truck with an image of Peter Wheat on the side. 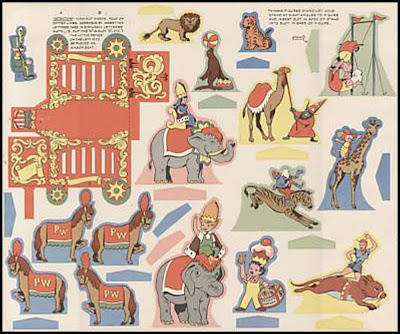 And the Peter Wheat Circus, which was several pages of punch-out figures and toys. The Circus doesn't look to have original Kelly artwork, based on the small scans on the one set I saw come up for auction.
Posted by Thomas Haller Buchanan at 8:16 AM