A Lot of Potential Class

Hi folks! Back (way back) when brang new Pogo strips would come delivered to my door every Sunday, I would almost take for granted that such a thing would go on and on forever. But during the period reflected in this strip I had a hint, just a hint, that Kelly's artwork was starting to diminish—the richness of detail was starting to dry up. At the same time I was distracted by real world details (such as at the time of this strip, it was my first month in basic training), so I didn't think much about it.

I didn't know at the time that Kelly had diabetes and was feeling the consequences of the illness. I empathize with the task of working while ill. 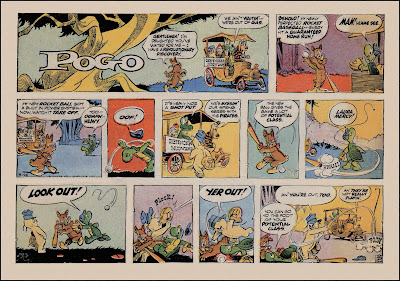 Posted by Thomas Haller Buchanan at 11:56 AM