A lot of animators enjoy and appreciate Walt Kelly's work and look to his art for inspiration.
I received a nice note from Bob Scott, an intrepid animator working at Pixar, an amazing place to work I'm sure. On the side, Bob creates a fun online comic called Molly and the Bear.
Bob is also a big fan of Pogo—big enough to slip Pogo and the others into his comic strip as a tribute (it looks like a Little Nemo tribute in the last panel as well). Check out today's Molly and the Bear by clicking here, and then subscribe.
Thanks Bob, for the heads up — and best wishes to y'all at Pixar! 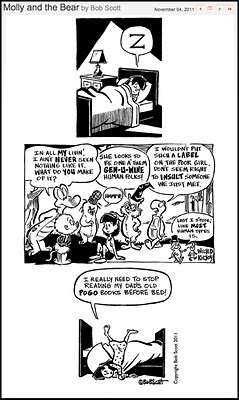 About Molly and the Bear

It can be tough on a family when someone new has moved in, especially if it's a 900-pound scaredy-bear so terrified of wilderness life that he's fled to the burbs. Fortunately Bear was found by Molly, a fearlessly optimistic 11-year-old can-doer who has taken him firmly in hand, devoted to seeing her hirsute BFF cope with modern life. Molly's Mom is happy with the new sibling - Bear's an excellent conversationalist and loves her homemade cookies. But Dad is having a harder time, his role as center of the universe now shared with an ursine behemoth who, unfortunately, adores him.